How “Richard II. The Book” Was Made

This is a story of how “Richard II. The Book” was made

Story was published in Shakespeare Magazine # 7/ 2015

In 2013 the Artistic Director of the Royal Shakespeare Company Gregory Doran put on Shakespeare's «Richard II» in Stratford-upon-Avon with David Tennant in the title role. In January 2014 the filmed performance was shown in Russian cinemas. This broadened the audience of the production, as it became available to thousands of people, and then tens of thousands more - when the DVD was released in May. These circumstances have made it possible to start our project: while many of us came to Britain from Russia especially to watch the play live, without the recorded video, our book wouldn’t have gained such support.

It all started with a post on the Russian social network VKontakte on 18 May 2014 in which artist Anna Ryzhova published her drawings to the production of ‘Richard II’. 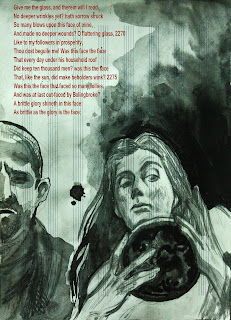 I posted a comment saying it would be great to publish this Shakespeare’s play with those drawings and the translated text edited by us. The idea of mine was accepted with enthusiasm. And it immediately set the wheels in motion. We've opened a bank accounts specifically for this project, calculated the potential expenses and started to raise money for layout and printing. From the very start the project was a purely nonprofit and crowdfunded – the organizers earned nothing out of it, the money was needed only for printing, layout and shipping.

We had to take English and Russian text and edit them. The thing is that we chose not simply to publish a parallel version of the play in the two languages, but also to mark the parts which had been omitted from the original play by Gregory Doran in his production.

The matter was complicated by the fact that the text had to be literally "parallel" - that is, the same lines had to be placed on the same level. And since Russian translation of the line is almost always longer, it was not a trivial task.

In addition, despite the fact that the translation of the play in Russian by A. Kurosheva was most precise available, it was essential for us to achieve the maximum possible adequate translation of some lines. We had a lot to rack our brains about, and the final changes were made in September! Sometimes it took months to find a worthy translation equivalent!
The book also contains commentaries and notes. We gathered them from all existing Russian publications and wrote a couple on our own - so in this respect our book is also unique.

The text of the book in the end was read from first page to last at least five times.

You can look through the digital version of the book here: http://issuu.com/anastasiako/docs/richard_ii._the_book

All along a remarkable foreword was created. It was written by Natalia Fomintseva, and I hope all of you appreciate the tremendous work Natasha did to research the literary sources. How sophisticated her text is, in which a review of Gregory Doran’s production and a concise version of the story of Richard II’s real life intertwine. Later we translated the foreword into English (our thanks goes to Natalia Koroeva and Maryna Reznikova, who worked on the translation). The book doesn’t include the foreword in English, but we sent it to everybody interested, and also passed it on to Gregory Doran, RSC, and David Tennant. You can read the complete text in English here: http://issuu.com/anastasiako/docs/foreword

Here is an excerpt from the Foreword:

…At the tower of the Flint Castle he clutches his heart for the first time wondering if it’s still beating or if it’s broken (later at his own deposition he feels sharp pain several more times, but never breaks the character). There, at the tower, he has a rough time when it’s still possible to change everything, to enter the battle, but to the right from him, appear figures of the very last who stayed with him, and on his left, young cousin Aumerle weeps with fear, so this is the end of it. This gift – their lives – are still valuable for him even later, in prison, when he tears the hood off his murderer head and sees Aumerle. At that moment the curse from the minute ago is just depreciates. It is replaced by sorrow and tenderness – heartbreaking and inappropriate here and now – to the one who doesn’t know what he’s doing. To the one who with the king’s kiss gets a blessing to live. More than he deserves.

Starting from June, artist Anna Ryzhova (http://avoirbanane.tumblr.com/) worked on the drawings. And it also turned out to be a tricky task. Since from the very start we planned to publish not only a digital edition, but also a hardcover book, we had to figure out how the illustrations would look on paper - because they were originally made on music paper. We went to a printing house to see for ourselves… And eventually the music paper version had to be rejected. As a result, all the drawings, even those that had been sketched, were made from scratch. We can compare them now.

We chose to print the half-title pages (a half-title is a page which opens a chapter or part of a book), end leaves and cover in color. The other drawings are black and white with one or two colors added.

This is what the ideas and sketches looked like. 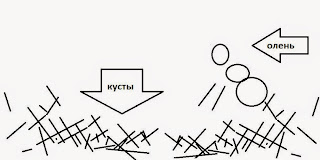 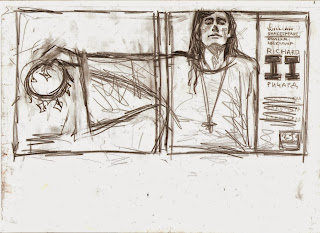 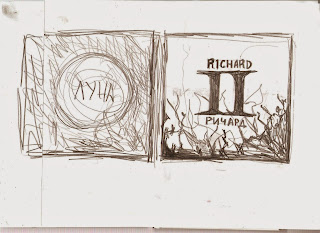 And here comes the final result. 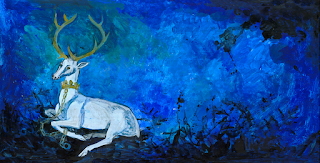 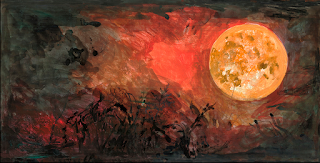 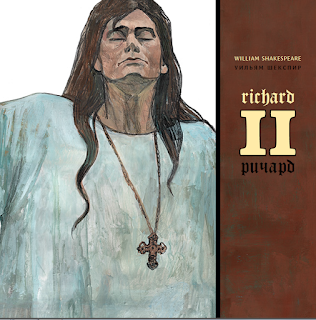 Although we decided not to use universally recognized crowdfunded platforms like kikstarter.com, we were able to raise money without incidents. Thanks to all members who have trusted us. We remind you once again that the project was crowdfunded, the organizers have not earned a penny on it, all the money were collected only on printing and postage costs of books.

The book happily reached even the back of beyond in different countries. We received dozens of enthusiastic comments. Here come a few of them.

The books arrived already!!!
I did not expect them to be here SO fast!
They look wonderful and I am so impressed with your work.
I am a typesetter and my family publishes magazines since several decades, so my daily life is about printing and preparing stuff to be printed - therefore I know for real how good your book is - not just from a fan-view.
I thank you again very much for allowing me to get these two copies. It means a lot to me to have them.
THANK YOU!!!!!

I can't believe when I saw the book at first because it's much better than what I expected! Really awsome, magnificent and I'm gonna love it! I can see the efforts of you and your team put into in everywhere. Such a masterpiece.
I don't know how to speak or read in Russian yet it also has english script, so I think I can enjoy it.
I send a pix to show my gratitude :)
Thank you and have a good day from Korea. 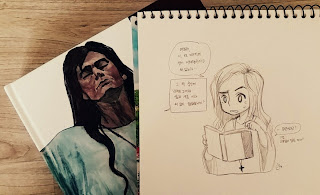 The translation of remarks in the picture
"Hey? Well, why are this book saying I’m going to be … killed by someone?"
“You must’ve missed the line, THE LIFE AND ‘DEATH’ OF RICHARD THE SECOND, during reading the book.”
“…What? You mean I’ve just read the spoiler of the end of my life?”

The beautiful book arrived in Colorado on 11 February 2015.
I can't wait to sit down and really go through it!!!
Great job to all involved!!! 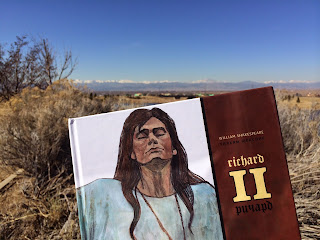 Yet Gregory Doran and David Tennant’s words became the best recognition for us.

The Story of How David Received his Copy

On 12 January 2015 David was supposed to be the host in a live broadcast at Absolute Radio. I went to London, having taken three copies of the book – for Gregory Doran, RSC’s archives, and, naturally, Mr. Tennant. I was going to pass Davis his copy after the show, while the other two were arranged to be left in RSC London office.

David was so kind as to spare a minute after the live broadcast to sign autographs, and that was when he was handed his copy of the book.

He stared at the book cover in round-eyed wonder, literally, and a sincere “Oh my goodness!...” slipped out. “From Russia??” he asked again in amazement, as if he found it hard to believe it had been made in Russia. David asked: “Is it for ME? Or do you want me to sign it?” A passer-by was lucky to shoot a photo at the exact moment I was passing the book. 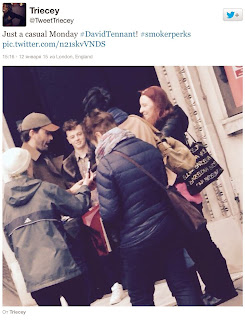 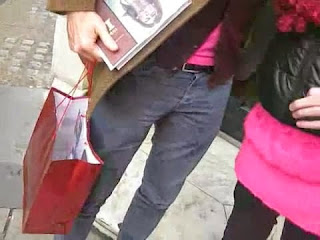 Besides, there’s a video recording of thats moment made by Helen, David’s longtime fan:

However, it was not the end of the story. On 15 February the 15th ceremony of What’s On Stage Awards was held in London, and I attended. David Tennant had been nominated for Best Actor for his part in “Richard II”, and Gregory Doran – for Best Direction for the same production. As you’ll know, David won. And I was exceptionally lucky to have a chat with Gregory and David before the start of the show. Gregory called the book ‘extraordinary’, and David’s epithet was ‘amazing’. This is the best reward we could hope to receive. Even better than an Oscar.

The book “Richard II” is a one-of-a-kind project which has united a great number of people from different countries. It has received high acclaim from professional publishers, artists and theatre critics. Since the book proves to be not only beautiful but also highly educational, we have decided not to put a stop here. Now we are working our way around to creating the book “Hamlet” http://www.dtbooks.net/p/hamlet-book-eng.html. It is also supposed to be composed of parallel texts in Russian and English, commentaries, notes and a preface. The illustrations will be based on RSC’s 2008 production starring David Tennant as Hamlet. The parts modified and omitted by Gregory Doman will also be marked in the text of the play. This time, though, we intend to translate everything into English including the preface and the notes.  If you find this project interesting, you can follow the news here: http://www.dtbooks.net/. We are going to post important updates in English, too.


A few words from the project participants:

Natalia Fomintseva, the author of the preface: ‘Two weeks of my life and a couple of projects I failed (King Richard, having settled in my mind, gave me no chance to think about anything else, which is generally just like him). In a word, thank you for the opportunity to tell this story the way I see it. Starting from September it was knocking at my heart like Klaas’s ashes”.

Anastasia Koroleva, the manager of the project: ‘It was the most remarkable adventure in my life. Some time ago, before I got acquainted with David Tennant, I wouldn’t have had the courage to anything like that. He inspires – he does it with the story of his life, with his attitude to work; he has made me believe that you can make any dream come true, however implausible it might seem. What appeared impossible in May became reality in October when I received an advance copy of the book. Now I can admit that I simply burst into tears when I saw that the book had materialized. Now this copy is signed with David and Gregory’s autographs, and it is probably the most treasured possession in my home”.